That’s right, as of August 1st, there are 330 active open-source projects hosted at the Eclipse Foundation and if you look across the 1120 Git repositories that this represents, you will find over 162 million physical source lines of code. But beyond this number, let’s look at how it was obtained, and what it really means.

I’ve blogged several times about the importance of using metrics to monitor the health (and hopefully, growth!) of an open source project/community, and lines of code are just one. You should always have other metrics on your radar like the number of contributors, diversity, etc.

There are many ways, and many tools available out there, to count source lines of code. Openhub (previously known as ohloh) used to be a really good tool, but it doesn’t seem to be actively maintained. For a few years now, I’ve been relying on a home-made script to analyze Eclipse IoT projects, and it’s only recently that I realized I should probably run it against the entire eclipse.org codebase!

In this blog post, I will briefly talk about how the aforementioned script works, why you should make sure to take these metrics with a pinch of salt and finally, go through some noteworthy findings.

The script used to count the number of lines of code is available on Github. It takes a list of Eclipse projects’ identifiers (e.g ‘iot.paho’) and a given time range as an input and outputs a consolidated CSV file.

The main script (main.js) uses the Eclipse Project Management Infrastructure (PMI) API to retrieve the list of Git repositories for the requested projects and then proceeds to clone the repos and run the cloc command-line tool against each repo. The script also allows computing the statistics for a given time period, in which case it looks at the state of each repository at the beginning of each month for that period.

Once the main script has completed (and it can obviously take quite some time), thecsv-concat.js script can be used to consolidate all the produced metric files into one single CSV file that will contain the detailed breakout of lines of code per project and per programming language, the affiliation of the project to a particular top-level projects, the number of blanks or comment lines, etc.. It is pretty easy to then feed this CSV into Excel or Google Spreadsheets, and use it as the source for building pivot tables for specific breakouts.

Just like virtually any KPI, you want to take the number of lines of code in your project with a grain of salt. Here are a few things to keep in mind:

All lines of code are not created equal

There is an incredible diversity of projects at Eclipse, and while a majority is using Java as their main programming language, there’s also a lot of C, C++, Python, Javascript, … 10M lines of Java code probably don’t carry the same value (i.e. how much effort has been needed to produce them) as 10M lines of C code.

Trends are more important than snapshots

It is nice to know that as of today there are 162 million lines of code in the Eclipse repositories, but it is, in my opinion, more important to look at trends over time. Is a particular programming language becoming more popular? Are all the top-level projects equally active?

I didn’t have a chance to run the scripts for a longer time period yet, but I will make sure to share the results when I get a chance!

Generated code, should it count?

There is a fair amount of generated code in some projects (in the Modeling top-level project in particular, of course), which certainly accounts for a few million lines of code. However, generated code often is customized, so I think it doesn’t necessarily skew the numbers as much as one would think.

Development does not always happen in a single branch

My script just looks at the code stored in the main (HEAD) branch of the Git repository. Some projects may have more than one development stream and may e.g. have a “develop” branch that is ahead of the main stable branch. Therefore, there is very likely more code in our repositories than what this quick analysis shows.

As my script outputs pretty detailed statistics, it is interesting to have a quick look at e.g. how the different top-level projects and programming languages compare.

If you end up using my script and have any question, please let me know in the comments or directly on Github! 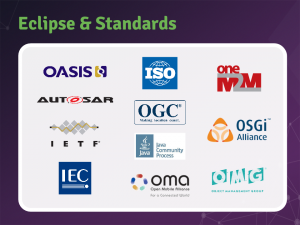 Did you know that the Eclipse Foundation is home to many open source implementations of industry standards?

From IETF to ISO to oneM2M or OASIS, we have many open source projects that provide industrial-grade implementations that anyone can use to evaluate a given standard, or to effectively use it in their commercial solution.

We do believe that open source is key to the adoption of standards, and in a presentation I gave last week at an Open Source Think Tank organized by IEEE, I shared some thoughts on what makes a standard successful, as well as how Eclipse has proved with recent success stories that open source and open communities are a key factor.

The two examples I used in my presentation (see the slides at the end of this post) originate from the Eclipse IoT community.

OMA (Open Mobile Alliance) LWM2M is a standard for doing device management of IoT devices (i.e remotely monitor the device’s health, upgrade its firmware over-the-air, etc.). The first drafts of the standard have been published less than 4 years ago and today, LWM2M is already used in commercial products, and has a thriving community of developers and contributors gathered around two Eclipse open source projects: Eclipse Wakaama, and Eclipse Leshan. I think you will agree that this is the kind of timeline you would like to see for all standards!

The other example is MQTT, a very popular IoT protocol that I’m sure you’ve heard about! 🙂 In just a few years, it went from a de-facto standard to an actual OASIS and ISO/IEC standard. Having a rich ecosystem of open source MQTT implementations (including Eclipse Paho clients, and the Eclipse Mosquitto server) certainly helped the standards organizations to pin down the issues that need to be fixed in the spec much faster. What’s more, open source projects will also fuel the future of the MQTT specification, as they allow for new ideas to be explored (see e.g this recent work on MQTT-SN).

My hope is that Standards Developing Organizations will start embracing open source initiatives more and more. Open source communities are a great place for innovation, and can host standard implementations that sometimes actually become reference implementation. They also complement very well the role of the SDOs, which are here to enforce some needed processes when it comes to evolving a standard, anticipating incompatibilities or corner cases, etc.

As mentioned above, here are the slides I used during my presentation. I am looking forward to hearing your comments and feedback.

About 9 months ago, I published a blog post showing up some interesting metrics about the Eclipse IoT open-source community.

I have recently crunched the numbers again and here are 3 interesting facts about Eclipse IoT and its developer community:

A very diverse community of contributors

It is one thing to develop open source IoT technology (and Eclipse is definitely not the only organization working on it) but it’s quite another thing to do this in a transparent and open manner.

At Eclipse IoT, over the last year, 125 different developers have been writing code and fixing bugs. What’s more, they come from 20+ different organizations, demonstrating that open collaboration is not only possible, it is key to ensure technology adoption and long-term support.
Leading the charge in terms of numbers of developers are: Eurotech, IBM, Sierra Wireless, LAAS-CNRS and Deutsche Telekom. Other companies involved include: Intel, IBH Systems, Cisco, itemis, innoQ, …

A solid and growing code base

The Eclipse IoT portfolio is very rich (from protocols implementations, to frameworks for building IoT gateways, to tools and libraries for industrial automation), so it is no surprise that we now have a very solid code base, with over 1.8 million lines of code (yes, you read that right!).

It is also interesting to see the progression over the years, demonstrating that a majority of the projects are under actual development. A wide range of supported languages and platforms

Not very surprisingly, as many of our projects target smart IoT gateways at the edge of the network, we have a predominance of Java in our code repositories (~70%), but our 1.8 million lines of code also contains lots of C/C++ (10%) as several of our projects target constrained embedded environments. You will also find Python, Javascript, Lua, or Go, as projects like e.g. Paho try to provide implementations across as many platforms/languages as possible.
So while we believe Java is important for IoT, in particular due to the very large ecosystem of developers familiar with it across the whole IT industry, we also recognize the importance of being language agnostic to make sure that IoT developers have access to good open source libraries for their platform of choice.

I would really like to hear your comments on these findings, and would be happy to discuss how this relates to your current experiences in the world of IoT. Feel free to use the comments below!

Note: most of the metrics related to Eclipse IoT are readily accessible from our dashboard. Some extra analysis of the source code repositories has been conducted to e.g. compute the lines of codes.